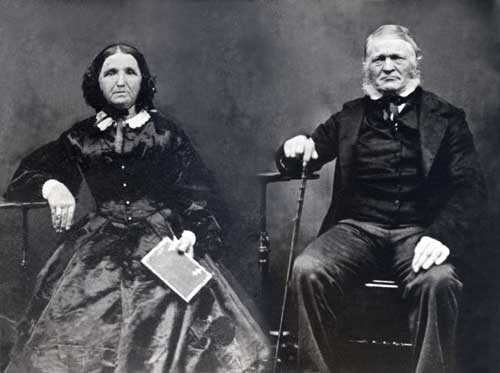 Samuel Joll (1805-1879) and his wife Elizabeth (née Treliving, d. 1882) made the three-month voyage to New Zealand, with five children, between November 1841 and February 1842. They eventually settled in New Plymouth and had five more children.

Contributed by a descendant of Samuel and Elizabeth Joll, Margaret Joll of Napier

‘Where be ye going?’ demanded Josiah, clouting his brother with a bridle.

‘I be going to buy a farm from the Plymouth Company in New Zealand’.

With British Sovereignty proclaimed, the Company promised favourable prospects for colonisation, the gift of a section in New Plymouth on arrival and more resolutions than its resources could accomplish. And so on 2 November 1841 Samuel Joll, his wife Elizabeth and their five children boarded the barque Timandra, commanded by Captain Skinner.

Timandra had unusual space on the main deck and height between decks of six foot, five inches, affording comfort for her 10 cabin passengers, 201 free emigrants and complement of 22 officers and men. These features did not, however, ensure a happy voyage. The language of the emigrants offended the cabin passengers, while their exclusive use of the covered poop deck and pretensions of superintending the schoolroom rankled.

By 16 December, six weeks into the voyage, discontent and sickness prevailed. On 18 December, two children died and another was dangerously ill. The doctor’s instructions were to perform post-mortem examinations, but the emigrants came forward to stop this. As Captain Skinner did not have enough force to enable the doctor to proceed with opening a body, he was obliged to comply with their wish. Five children and one adult died during the 113 day voyage and five babies were born.

Female emigrants were allocated work during the voyage, and records show that Elizabeth Joll hand-sewed 26 garments – blue and grey shirts and white cotton shifts. For health reasons, chloride of lime was sprinkled in the berths. This was an unpopular practice and when the Chief Mate was struck down, Samuel spent time on deck in hand bolts.

Samuel, Elizabeth and their children disembarked at New Plymouth, by whale boat, on 23 February 1842.

Determined struggle was eventually rewarded in the rich agricultural land of New Zealand, and generations of Jolls and their descendants trace their lineage back to this couple. Neither Samuel nor Elizabeth ever returned to the ‘home country’. Samuel died in 1879 and Elizabeth died in 1882. Both are buried in New Plymouth.