From Nottingham on the Flying Foam 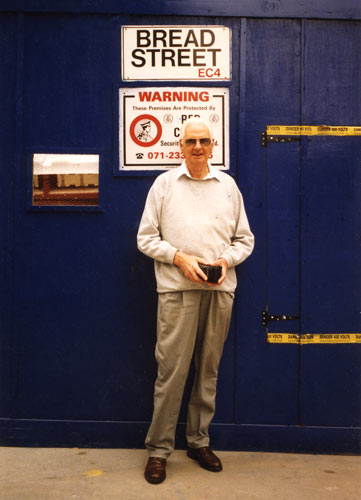 Les Jeffs is the great-grandson of Charles Jeffs, who emigrated in 1864. This photograph was taken outside No. 23 Bread Street in England, the site where his relative Edward Jeffs once lived.

In 1864 Charles Jeffs, a shoemaker, his wife and family of four were living in Nottingham, England. Unfortunately the eldest child Charles took up a .22 rifle and shot the hands of the Nottingham town clock!! This event changed the family situation; Charles senior, with four children, left in the sailing ship Flying Foam, leaving his wife in Nottingham.

The journey to New Zealand took 123 days, via Cape of Good Hope and south of Australia. En route, while in the tropics, the crew mutinied and tried to take over the ship. The captain and some crew and passengers overpowered the mutineers and they were put in irons. The passengers then assisted the remainder of the crew to sail the vessel into Auckland. The mutineers were handed over to the constabulary upon arrival in Auckland.

Charles Jeffs and his four children then settled in Dairy Flat near Warkworth, paying £100 for a small farm of 103 acres upon which he built a modest home (now demolished).

My grandfather (Thomas) was the second child of that family of four children. My grandfather could not read or write, as in 1864 there was no education for children. My father Charles incidentally was Dux of the Linton Primary School, near Palmerston North.