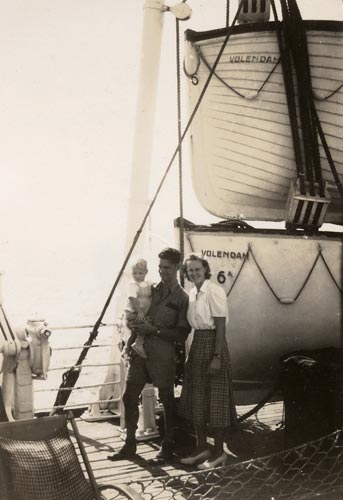 With her husband and son, Louise de Leeuw (née Leemans) sailed to New Zealand on the Volendam, a Dutch immigrant ship, in 1950. The family are all smiles here, but life on board was difficult, with 1,600 people crammed 250 to a hold, three bunks high, husbands and wives in separate parts of the ship, no facilities for babies or toddlers and only saltwater to do the laundry.

Contributed by Louise Hansen-Leemans of Auckland

My husband and I came from Holland. We were married shortly after the war and, through friend’s relations, heard what a wonderful opportunity emigrating to New Zealand would be for us. We were having to share a house with another family due to the lack of housing available after the Second World War. I had a young baby boy when we finally decided to emigrate in 1950.

We were required to undergo a physical examination to see if we were physically sound enough to emigrate. This included an x-ray for tuberculosis.

We left on the ship Volendam, which had been used in the war as a transport ship for troops. It was an old boat and I believe we made the last journey in it before it was scrapped. It had no stabilisers.

The women and children were separated from the men in different holds down in the depths of the ship. Everyone slept in bunks three high and there were 250 people in each hold. The passenger list totalled 1,600 people. There were no facilities for babies and toddlers at all and every mother had to do her best to make sure her children did not fall out of their beds or even into the sea.

It was particularly rough weather in the Bay of Biscay. The men were not allowed to come anywhere near the women’s quarters. The women were required to do all their own washing, including the washing of their menfolk. When finally the washing had been done using saltwater soap, one had to make a washing line somewhere on the deck, and you would have to sit under it until your washing was dry. If you walked away for any length of time then your washing would have been stolen by one of the many other passengers.

The first port of call was Port Said. All strange to me; all those boats that came alongside of our ship trying to sell their wares; and the harbour police, or whatever their function was, coming on board for inspection. Port Said was the halfway mark between Rotterdam and Sydney.

The last three weeks were less pleasant as many children got the measles and had to lie, three to a bed, in the ship’s hospital. The weather got warmer and warmer and people’s tempers frayed. We all had had enough and wanted the journey over and done with.

One afternoon I came down the stairs to the sleeping quarters and there in the middle of the hold were women fighting amongst themselves. Could they scream and yell and pull each other’s hair! There was quite a bunch of them and I did not stay to find out what the end result would be.

Finally we reached Perth in Australia and we were allowed to get off for a few hours and see the city. I sure enjoyed the feeling of firm ground beneath my feet. The ladies were so nicely dressed with white hats and shoes, I thought it a marked difference to the dull clothes worn by the European people who still had textile rations when I left. It was a joy to behold all the flowering plants and trees.

Then we travelled from Perth to Melbourne and on to Sydney. There we stayed for one week in an ‘aliens’ camp, where all our papers were checked and rechecked, before we could go on to New Zealand. The ‘flying boat’ took off from Sydney at midnight and all the way to New Zealand we never saw a thing. It was pitch black. It took eight hours to fly to Mechanics Bay in Auckland.

Early in the morning of 3 December 1950, we arrived in our chosen country of New Zealand. After our emigration papers were checked by the wharf police we were free to go and check into a hotel, which had been booked beforehand on the Waterloo Quadrant.

We received a ‘Certificate of Registration’ (Aliens Act 1948) on our arrival in Auckland. It was stated that we had to notify within 14 days our change of abode, and place of employment or occupation to the nearest police station. Failure to comply with the provisions of the act would render you liable to conviction and imprisonment for three months, or to a fine not exceeding 100 pounds.

The next morning at 7.30 the ‘Landliner’, which was a bus, took us to Napier where family members of the friends in Holland met us. The trip took 12 hours.