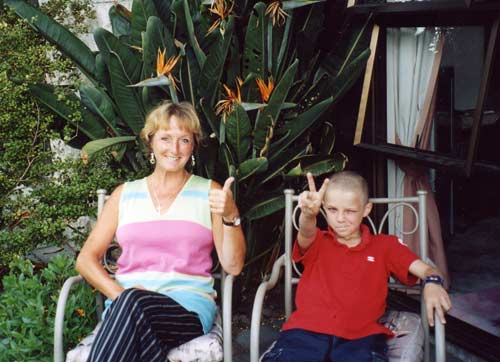 Decades after her husband suggested they move to New Zealand, Elaine Cartlidge finally made the journey from England to the country where her life began. In this photograph, she and her youngest son Fletcher enjoy the sunshine outside their new home in Christchurch – a far cry from the 400-year-old gardener's cottage they left behind in an English midwinter.

Contributed by Elaine Cartlidge of Christchurch

Thirty years ago, my future husband Pete asked me to follow his dream – New Zealand. We were 19. I said no.

I was actually ‘made in New Zealand’ in 1954. My natural father, who I never met, was one of the first male nurses in New Zealand at Burwood, Christchurch. He was a descendant of the Smarts and Pentecost families who arrived on the Randolph, one of the first four ships in 1850. My natural mother came from Kent, England, and became a registered nurse at Christchurch Public Hospital in 1949 before moving to Burwood. However, she returned to England, where I was adopted.

I made contact with her and we spent three weeks in New Zealand meeting my half-sister and half-brothers in 1997. On my return to England we applied for New Zealand residency and on 31 September 2002, we were accepted. We had an idyllic life in a 400-year-old National Trust cottage; everyone was shocked, but we knew it was right.

Christmas 2002 was all packing, parties and tears. Our little cottage was empty and looked sad. On our last night we had no sleep as frantic packing went on until 5 a.m. Some friends came and took our lovely Labrador. All was quiet, dark and cold as we were bundled into our friends’ cars. We felt numb and sick on the way to Heathrow and even worse when we got there. What could we talk about, leaving one life and starting another? It’s a bit like dying. We had no keys, no car and only a visa card. I think goodbyes are worse for those left behind. It’s final. We were on our own, belonging nowhere and a drink at the bar was needed.

The huge plane did nothing to calm my husband’s nerves, but we were together and it was only 11 hours to Los Angeles. Our son Fletcher had just completed intravenous antibiotics at home. As he has cystic fibrosis, he needed physiotherapy, nebulisers and medications. We hardly spoke and kept looking out over Greenland, amazed at our planet, and wondered what on earth we were all doing.

We had a lumpy landing in LA. It was very stormy and seemed more alien and hostile than Greenland itself. Ashley and Gregory needed a cigarette and were bad tempered. We checked hand luggage out and back in again for a two hour stop! The weather got worse, preventing the crew from arriving. I can remember my family in the shape of a starfish, asleep with their heads on the luggage.

Fletcher couldn’t wake up when we boarded. He was so pale, looking like a drugged-up ‘munster’, that the staff took pity on him and let us through early. Useful tip: always take a sick child on a long flight! So we were zombies again for 13 hours.

The excitement got hold of us at the sight of Auckland’s lights. Very soon we were out in the hot sun heading from the international arrivals to domestic departures. The little bus couldn’t cope with us all so we followed the blue line I think. There was a lot of relief and hysterical giggles and cigarettes smoked.

It was a humane flight to Christchurch; the journey was almost over. I thought about Fletcher starting a new school in two days and my nursing post, starting in two weeks.

My sister met us. We squashed into cars and then crowded into her house, looking at our cases. We had five weeks before our furniture arrived and would we have a house then? It was 14 February, cold and raining. We missed our dog, who used to lie with Fletcher when he had treatment.

The very next day we bought a car. The day after, we looked at what was to be our lovely new home. For a week or two we wandered from meal to meal, school and back, not knowing that by six weeks all would be sorted.

Pete got his dream and I feel as though I’m where I belong, ‘a full circle’. New Zealand – God’s country – is a reminder that we are transient visitors in such a vast expanse of sea and land. To sum up life here: ‘easy as, awesome eh’.