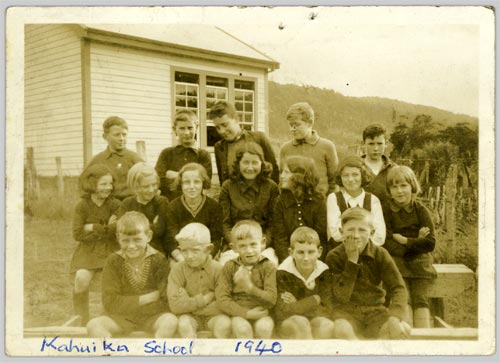 Mary Murphy went to schools in the Catlins, South Otago, in the 1930s and 1940s. Mary is fourth from left in the middle row of this photo of Kahuika School pupils, taken in 1940.

I started school in the Catlins district in 1934, at a small country school at Houipapa. The teacher, Miss Bullen, lived at the school in an attached school house with her elderly mother. These were ‘depression years’ and no one was wealthy. My father had just lost his job at a sawmill, which closed because there was no demand for timber.

I had over three miles to walk to school on a narrow muddy metal road, shared by drovers with cattle and sheep, the odd motor car or old timber trucks, and traction engines. On meeting any of these it was necessary to exit the road and climb up a bank on the road side, or take to the bush, for safety.

I travelled the road daily, mostly alone – but sometimes had big boys from a nearby farm for company. They teased me, and I wasn’t happy to be near them. I felt safer if I walked with the occasional ‘swagger’: men who walked the country looking for work of any kind. They were all types, old and young. All carried their ‘sugar bag’ swags on their backs and were decent men, down on their luck.

When I first started school slates were still used, but mostly I wrote in my exercise book with lead pencil, or used chalk on a black board. We didn’t wear school uniforms, and I felt very lucky, as a relative gave me a pair of her son’s heavy boots – he’d grown too big for them. Some of my school mates had no footwear. I can recall my Mum first cleaning those boots, then they were greased well with ‘pig’s lard’ to make them waterproof, then nuggeted. Mum hand sewed me a school bag out of a sugar bag, with a strap to go over my shoulder, and I had a nice brand-new rain coat to wear.

We were pupils from primers to standard 6 in one big classroom, which had an open fire for heating. The teacher ruled the classroom with her leather strap, or sometimes a ruler was used on us. It must have been very difficult to teach a classroom full of children of all ages and needs, but we all learned our ABC and tables and read our reading books.

In 1935 we moved further out the line to live at Caberfeidh and I then attended Rahuika School, beside the Maclennan River. War was declared in 1939 and we then had many teachers – young men came and went, mostly to be soldiers overseas. We had one very special teacher, Mr John Crossan from Dunedin, who was respected greatly by us all. We were sad to see him go off on active service, and we all wrote to him and sent him food parcels to Egypt.

We had some lovely young lady teachers who came there relieving – one taught us girls how to play netball, another taught us all how to swim in the nearby river, as we had no access to swimming pools and the sea was miles away. Some taught us singing, others drawing, while another would go home to Dunedin for the holidays and tell us all about any movies she had seen.

We were taught also how to prepare the ground to grow vegetables and make a flower garden – I have a certificate given to me for growing a lovely gladiolus called ‘Miss NZ’. It had 21 flowers on the stem.

In 1939 a Labour government was elected and we were given apples and a small bottle of milk to have at school each day. In the winter months we boiled the milk in a black kettle hung over the open fire and our teacher made us hot cocoa to have with our cut lunches.

Comparing my school days to those of my own children and their children, I don’t feel we were hard done by. We lived a healthy life in the open air, had a good education – perhaps better than city children – and felt happy and free!