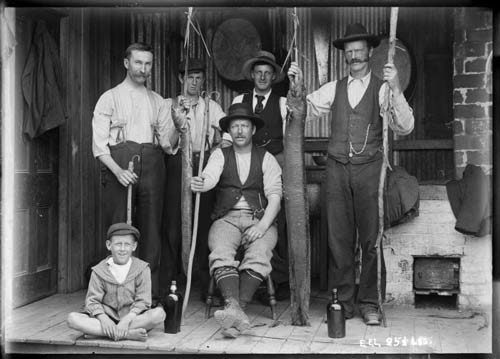 This eeling party from about 1910 poses with their catch.

As a young man on the early 1920s my father Harry McKee worked on farms in Taranaki. This story is from his reminiscences.

Two bigger boys and I used to go fishing for eels in the evening in the summer months. We caught silverbellies in the stony streams and yellowbellies in the muddy creeks. I preferred the silverbellies. They were shaped like a tadpole, with a biggish head; the rest of their body tapered off. Once we caught one that was about six-feet long. It was quite unusual.

We'd go out in the evening with a bob, made by threading worms onto about a yard of cotton. We'd loop the thread into a circle, then double it and re-double it until it was just a ball – about the size of a tennis ball. It was tied to a length of strong cord, which was then tied to a short piece of broom handle or something similar. We'd ‘bob’ the eels with the worms and when they grabbed hold of the bob with their backward-sloping teeth we'd pull them out of the water onto the grass and kill them. We threaded fireflies sometimes as well.

I was taught how to skin an eel by my boss. He'd hang it up and cut around behind the head and then peel off the skin. It was just like taking off a rubber glove. His wife knew how to cook them. She preferred silverbellies. She'd take off the skin and cut the body through. She'd cook it in a pan with fat. Sometimes we'd have them for lunch with a few eggs and potatoes, or as a starter for the evening meal. They were beautiful.