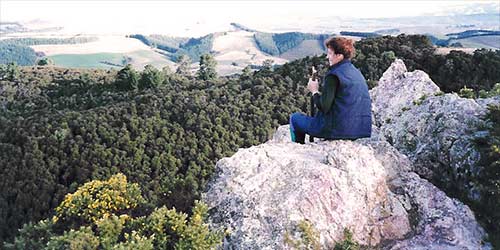 Frances More was dazzled by the view of the Kākahu Forest in South Canterbury. But getting to the top owed much to her son, Jono.

‘Come on Mum, I want to show you something!’ Jono called from outside the window of our rented cottage.

‘I want you to see the Kākahu Forest from the top looking down, it’s awesome!’ he pleaded.

Jono and I lived close by the Ōpihi River in South Canterbury. I was going through a rough divorce and the stress of it all was upsetting my body. I was becoming weaker and the doctor didn’t know why I was losing blood. Jono was 17 now, and growing up into a fine young man. He loved the beautiful area that we had made our home, and often explored the caves and limestone cliffs that surrounded our property. He had come home with treasures such as moa bones, a whale’s tooth with carved notches, and an oyster shell with a neat hole drilled in it – the remains of a hunting trip eons ago.

‘Oh please Mum, can we go, please?’ he implored.

‘All right darling, but I’ll need a walking stick.’

We drove the 10 minutes to the Limestone Kiln, which marked the entrance to the bush walk. It was a beautiful day and the tranquillity of the area was impressive. We followed the meandering Kākahu River upstream past old farmhouses and through paddocks spotted with cattle droppings, to the base of the mountain. We wound our way around the lower hills, and the higher we got, the steeper and rockier the terrain became. I needed to rest often and wished I had his energy as he streaked ahead. I was indebted to the trees along the steep path for their support of me and their solid hold on the earth.

Jono was patient with his (old) mother and stopped often to share his discoveries with me. Halfway to the pinnacles the ground flattened out before the next and final part of the ascent began. The view, even at this point, was tremendous, making all my efforts worthwhile. We could see our house in the distance, and the farm where Jono was born and where his older brother was living with his father. The neatly trimmed hedges, red roof and silos were the giveaway. The sky was empty except for a few white clouds amidst the pale blue. Magnificent. To think I could have been lying on the couch at home feeling sorry for myself!

We set off again, my breath restored – and before long we are astride the uppermost pink marble peaks. Looking down, the trees below seem like matchsticks, so small and so distant. How did I get up here? Why has it taken me 42 years to see this vast beauty?