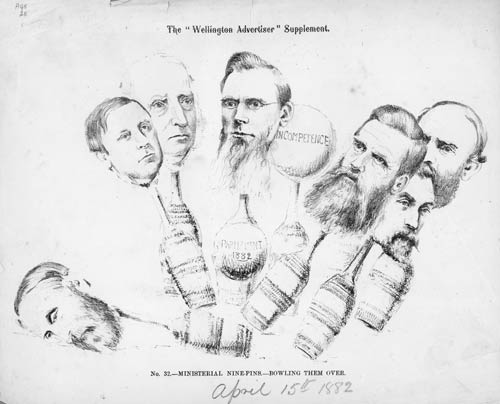 A cabinet that is fractured is politically vulnerable, as this cartoon of 15 April 1882 suggests. Minister of Native Affairs John Bryce had recently ordered troops to occupy the Māori village of Parihaka and arrest the leaders of a passive resistance movement protesting against the survey of confiscated Taranaki land. Although the government publicly supported his stance, there was disagreement within cabinet about his methods. When Bryce learned of Premier John Hall's opposition to his approach, he resigned, precipitating the resignation of the entire cabinet. In this cartoon the ministers are depicted as being skittled (knocked over) by a ball labelled 'incompetence'. They are (clockwise from left): Thomas Dick, William Rolleston, Frederick Whitaker, Richard Oliver, Harry Atkinson, Bryce and Walter Johnson.