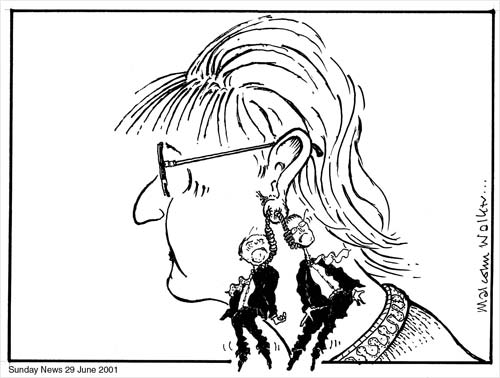 The self-expressive and sometimes expensive leadership style of Work and Income New Zealand chief executive Christine Rankin became the centre of a public furore in the late 1990s. The expenditure of $165,000 to charter an aircraft to fly staff to a meeting in Wairākei prompted three official inquiries, including one by State Services Commissioner Michael Wintringham. His report found a lack of financial discipline, and Rankin’s performance bonus was withheld. When her contract was not renewed in 2001, Rankin took the government to the Employment Court and lost. She argued that political interference from the government of the day had influenced Wintringham. Rankin’s style of dress, which included short skirts and dangly earrings, attracted media attention. She is shown in this 2001 cartoon sporting an earring in the form of a double noose, from which hang Wintringham and Social Services Minister Steve Maharey.