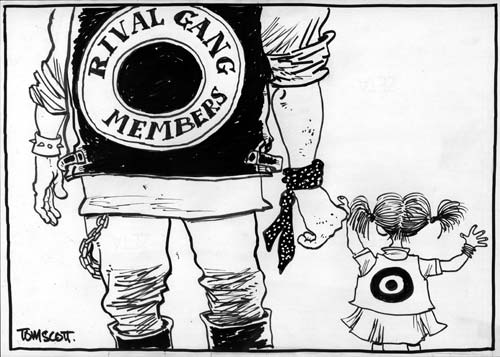 In 2007 two-year-old Jhia Te Tua was shot dead while she slept on the couch in her Whanganui home in a gang-related drive-by shooting. This cartoon depicts the dangers faced by children as a result of inter-gang rivalry. Two men were convicted of Jhia's murder, and others in the car were convicted on other charges. The Crown alleged that the man who pulled the trigger, Hayden Wallace, was prospecting to become a Mongrel Mob member, and had been ordered to carry out a drive-by shooting of the home of Black Power member Josh Te Tua.