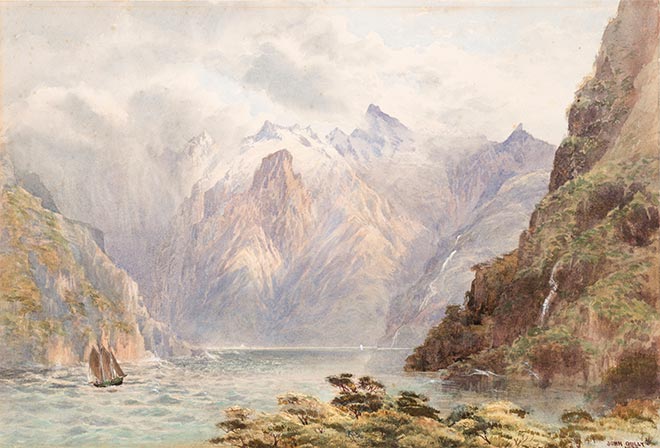 John Gully migrated to New Zealand in his early 30s and, after some initial difficulties, established himself in Nelson in the 1860s – first as an art teacher at Nelson College and then as draughtsman for the province's survey office. He painted a large number of watercolours, and his favourite subjects were mountains and sea – the popular subjects for painters evoking the sublime. Unlike much of his work, which portrays the Southern Alps, this example is set in Fiordland; but the green foreground, rough water with the lone sailing ship, steep mountains and stormy clouds are characteristic elements of this type of painting. Gully's work was a highly popular choice for inclusion in international and national exhibitions, where it served to advertise New Zealand's dramatic scenery, and he won a considerable following among locals too. However, by the late 20th century Gully was regarded as too conventional to rank as an outstanding New Zealand painter.

William Hodges, 'A view of Cape Stephens in Cook's Straits with waterspout'