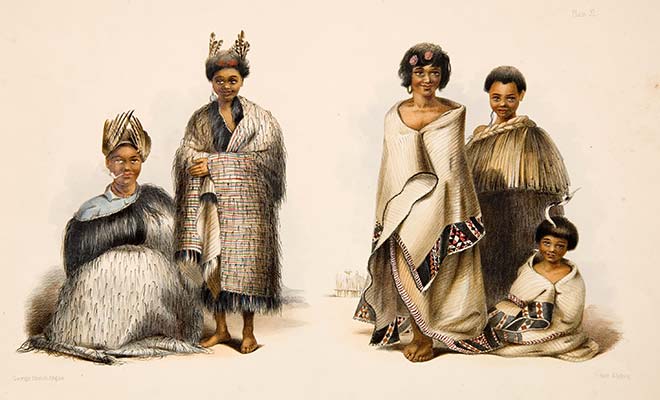 Two complete hawk wings fastened with flax adorn the head of Poahu (left) in this drawing by George French Angas from about 1847. His companion E Koti wears hawk's feathers in his hair, which is also adorned with red ochre and shark oil. Both young men came from Poverty Bay (East Coast) and were then visiting Mōkau in the King Country. They are wearing korowai, identified by the heavy black hukahuka (fringing) at the neck edge and attached across their cloaks. Poahu’s cloak is worn over a blue shirt, indicating the increasing use of European clothing. The front sides of his companion E Koti’s cloak are bordered with broad bands of coloured horizontal stripes. E Koti’s ear pendant is a medal of the Jesuit mission, reflecting increasing influence of missionaries. On the right are children of the Kāwhia chief Te Pakaru. Both girls are wearing kaitaka with richly embroidered tāniko borders, while the boy standing at rear wears a kākahu or rain cape of undressed flax leaves, which Angas noted was 'usually worn in wet weather, and by the natives when working at their plantations'.