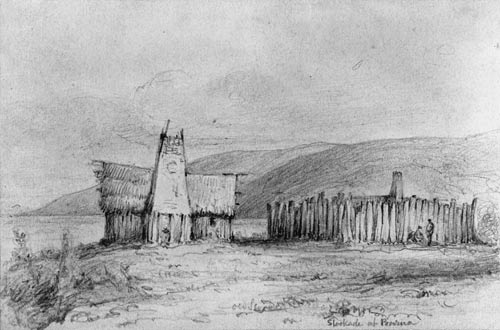 In 1846 martial law was proclaimed over the lower North Island in response to threatened military action by the chiefs Te Rangihaeata and Te Rauparaha. Armed police, led by Inspector D. S. Durie of Wellington and supported by soldiers and sailors, arrested several chiefs. including Te Rauparaha, at the site of present-day Plimmerton in July 1846, and confiscated arms and ammunition. This drawing shows the securely fenced police stockade at Paremata on Porirua Harbour, with a raupō hut standing on its seaward side.