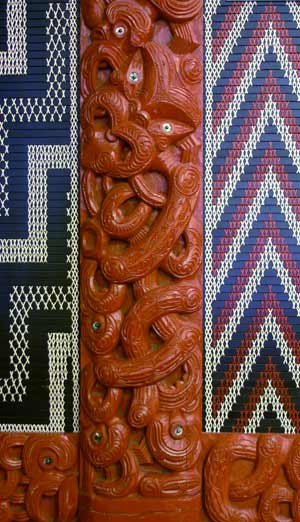 This carved representation of the god Tāne is inside Te Tumu Herenga Waka, the meeting house at Victoria University of Wellington. Many deeds were attributed to Tāne, including the separation of earth and sky. The following Ngāti Porou version of that story was recorded by Mohi Ruatapu:

It was Tāne-nui-a-Rangi who propped up the sky so it floated above. What he did was speak to his father: ‘Old man, you must be separated up above, so there will be light when you look down upon us’. … Then he said, ‘Perhaps, when I am separated up above, I will not make light’. Tāne told him, ‘I will give you signs’. So then he was propped up by them … Behold, their father was separated up above! Then his elder brothers said to Tāne, ‘Oh, we thought that when our father was separated, we would be able to look up and see him clearly.’ So then Tāne took a basket – this basket was The Fish-of-the-Sky, and the stars were the food inside it. He threw it to the sky, and as well he threw the sun and the moon. So then there was light. Then at last they saw what they looked like, and what their parents were like as well.