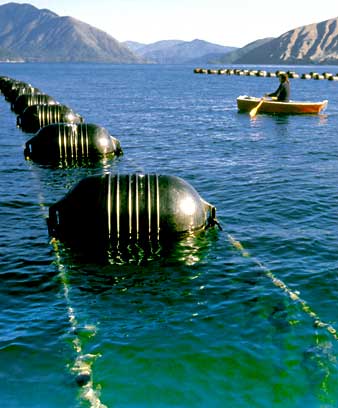 Mussels, salmon and oysters are culinary delicacies around the world, and they are farmed with great success in New Zealand. With its long coastline and temperate waters, the country is ideal for cultivating a variety of aquatic plants and animals, from seaweeds to seahorses.

Aquaculture is the farming of fish and other aquatic animals and plants. It can take place in the sea, in lakes, rivers, and in special pools on land. New Zealand aquaculture is a multi-million dollar industry.

Until the 1960s, mussels were picked by hand from rocks. In the early 1970s, techniques to cultivate mussels were trialled. The Japanese longline system was the most successful. Stockings full of mussel larvae are tied to submerged ropes, where they attach themselves and grow. Today, mussels are cheap and plentiful, and are exported to more than 60 countries.

Quinnat salmon thrive best in New Zealand, and have been farmed in three ways:

Rock oysters and dredge or Bluff oysters have been harvested in New Zealand, but in 1970, farmers noticed another species that had arrived in New Zealand and grew much faster – the Pacific oyster. They decided to cultivate it, and by 2001, 100 farms were producing 3,500 tonnes each year.

The main threat to aquaculture is from sudden growths of harmful algae, known as toxic blooms. Coastal waters are frequently tested.

More species are being trialled for farming, including pāua shellfish and sea horses, which are used in Asian medicine.

In 2004 the New Zealand government set up new laws to control the aquaculture industry and protect the environment.

Print the full story
Next: Page 1. Green-lipped mussels Next