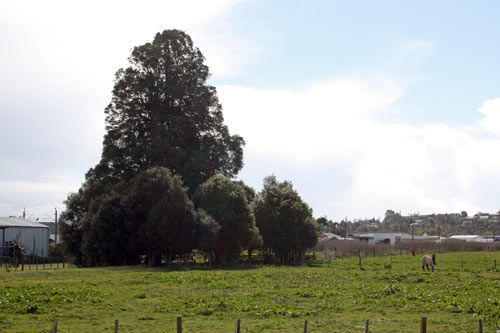 This 300-year-old kahikatea tree on the outskirts of Ōtorohanga is historically significant because of its connections with a battle in 1822 between Ngāti Maniapoto and Ngāpuhi. After defeating Waikato forces near Pirongia, just north of present-day Ōtorohanga, a Ngāpuhi war party moved south. They captured some local women and made camp under the tree. The women were carrying baskets when captured, and they were told to place them under the tree, which came to be known as Huipūtea (heap of baskets). Another war party of Ngāti Maniapoto, Ngāti Matakore and Waikato warriors had tracked the Ngāpuhi party and were watching them from hiding places. They attacked and Ngāpuhi were defeated. Huipūtea is on the Ōtorohanga District Council's register of significant trees.