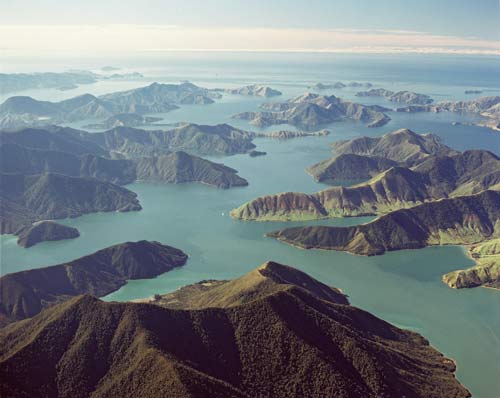 The Marlborough Sounds, at the north-eastern corner of the South Island, are a drowning landscape. Their coastal river valleys are slowly sinking and being covered by the sea – one of the few land areas in New Zealand that is sinking rather than rising.

Denis Glover’s 1964 poem is a memory of summers spent in the Marlborough Sounds.

There is always water. Every track, half-road or hilltop Throws a view of the labyrinthine Seeping and effortless sea Undulant, insidious, creeping Round hill and promontory Unexpectedly.

From the sea, from the boat’s deck Name if you can which lead, which premised peak Will open up, starboard or port, The winding road you seek Of the sea.

Top of the South Island