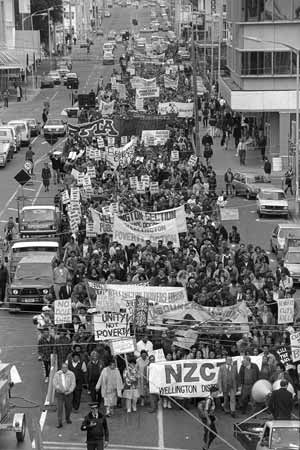 English immigrants occasionally attracted some criticism from New Zealanders as ‘whinging Poms’ or ‘union stirrers’. Pat Kelly, a leading New Zealand union official, is shown here leading a march against the Employment Contracts Act, 1991: he is the man with collar and tie directly in front of the banner. Although his father was Irish, Pat Kelly was born in Liverpool and came to New Zealand in 1954 as an assisted immigrant. During the 1970s he was attacked by Prime Minister Robert Muldoon as one of those stirring unionists who spoke with an English accent.