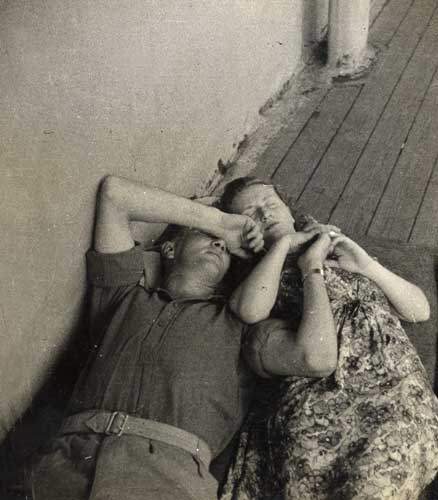 Newlyweds Anna Maria and Jack Hall spend some precious time together on the deck of the Tamaroa, a ship returning servicemen to New Zealand in 1946. While many war brides had to travel alone, a lucky accident meant the Halls were able to make the six-week voyage together.

Contributed by Anna Maria Hall and her daughter Carol Hall, of Hamilton

Jack and I were married on 29 December 1945, and we had our honeymoon in Trieste in a beautiful five-star hotel that Jack had booked previously, much to my surprise. We ate in lovely restaurants, and it was real luxury for a week, but all too soon Jack had to return to his unit somewhere in southern Italy. In the meantime, he had to arrange for my trip to New Zealand. I was unaware of how it was going to happen, but just waited to hear from him.

Some time toward the end of January he sent word that I was to leave Trieste for Bari, where I would be united with many other Italian war brides. Accommodation was to be provided in an old hospital requisitioned by the army and converted to temporary quarters for about 40 girls. The trouble was, how was I going to get to Bari? After the war, the railway service for civilians was almost non-existent in Italy, so I had to find an alternative. For a few weeks after the war had ended, I had worked for an organisation called SSAFA (soldiers, sailors, airmen, family association) and they were able to organise my travel to Bari in an army troops train. I had to leave from Udine, a city north of Trieste and travel all the way to Bari. My father and I were picked up in an army truck and travelled in the back to Udine, but that’s where the troubles of this nightmare journey began.

The driver didn’t know Udine or where the station was so he kept on driving and almost bypassed this small city. My father and I were banging and calling out to him to stop. Finally, he must have realised that he was going too far out of the city. He slowed down, so my dad started to dismount form the back of the truck, but suddenly he took off again and dad fell off onto the road. I was left screaming my head off while the driver picked up speed and continued on. I thought my dad was dead. It was night time and I couldn’t see where we were going and I couldn’t make him stop so I continued screaming. Finally another vehicle going the other way saw me waving and made him stop. We found my dad a few kilometers back and drove onto the station where a first aid patched him up. He was bleeding from his face and hands and was badly shaken. What a way to leave my family, my home and my country!

Anyway, soon after, I had to board the train and be on my way. I found another girl on the train who was also married to a New Zealand soldier. I can’t remember her name, but I know that I had to take charge, as she was useless.

The journey from one end of Italy to the other took two days, travelling always by army train and changing several times. Detours were necessary because some railway lines were still not repaired; the war had destroyed several main routes. The officers on the train looked after us quite well. They were very kind, although I still remember one South African senior officer telling me that I should return home, that New Zealand wasn’t a good country to go to, and I was making a big mistake. He couldn’t understand why my parents had let me go!

I finally arrived in Bari, hoping to see Jack there to meet me, or at least someone from his unit. But surprise, surprise, I was told that he had stolen or requisitioned an army truck and was on his way to Trieste to pick me up! You can imagine my parents’ surprise when they saw him. They couldn’t believe their eyes. As it happened there was another New Zealand soldier in Trieste married to a local girl who was also trying to find a way to get to Bari, so he had company on his return journey.

The best thing that resulted from this adventure was that Jack missed the ship he was supposed to be on, and so we travelled to New Zealand together. On 10 February 1946 we left from Taranto on the Tamaroa; a very long journey on a slow boat – almost six weeks. While we had separate quarters (we girls were on cabins on deck while the soldiers and officers were somewhere else on the ship), we could see each other frequently during the day. We arrived in Wellington on a foggy day on 19 March 1946.