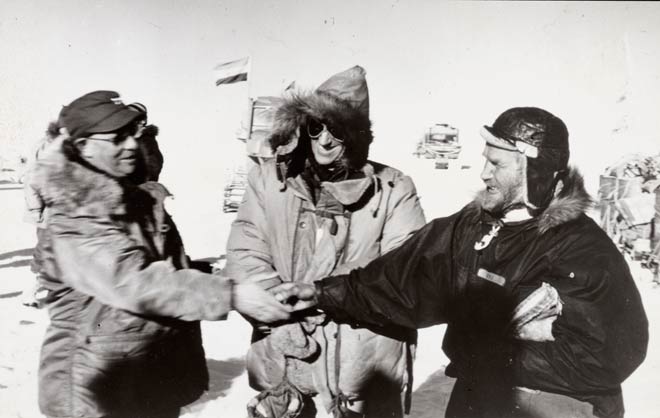 George Dufek (US Navy), Edmund Hillary and Vivian Fuchs (both of the Trans-Antarctic Expedition or TAE) were photographed together at the South Pole on 20 January 1958. Fuchs and his party had reached the pole that day. Hillary's role had been to lead a support crew setting up Scott Base and supply depots along a route to the South Pole. Once those tasks were complete they were to wait for Fuchs's arrival. Instead, saying, ‘We are heading hell bent for the Pole, God willing and crevasses permitting’,  Hillary and four other members of New Zealand’s TAE contingent set off for the South Pole. They got there on 4 January 1958, the first to make the journey by land since Scott’s party in 1912. Hillary's action and his relationship with Fuchs became the subject of intense media interest.

Dufek's polar achievements – with six others he had flown to the pole in October 1956, so leading the first group to reach it since Scott in 1912 – were not widely remembered outside the United States. He was strongly supportive of the TAE, and as commander of the United States's Antarctic Operation Deep Freeze, lived in Christchurch for many years.