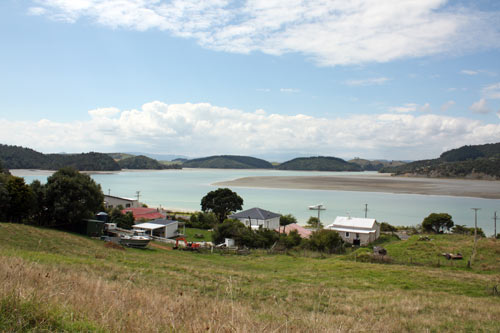 Te Waitere is a small settlement on the southern shores of Kāwhia Harbour. It was the site of a Wesleyan mission station in the 19th century. Before the missionaries arrived, this area was known as Ahuahu to Māori – Te Waitere is a transliteration of missionary John Whiteley's surname. Early settlers called the locality Lemon Point because Whiteley planted groves of lemon trees, and the top of the point bears this name. This photograph was taken from the mission site, which is marked by a heritage trail sign and a monument erected by the Historic Places Trust.