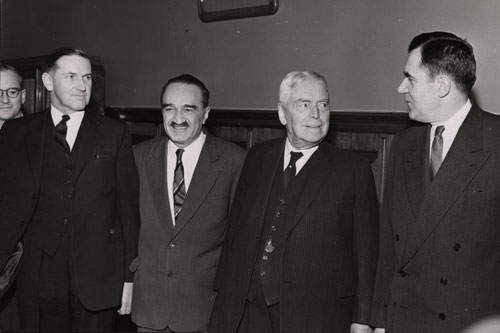 Meeting in Moscow in April 1960 are, from left, New Zealand Secretary for Foreign Affairs Alister McIntosh, USSR Deputy Premier Anastas Mikoyan, New Zealand Prime Minister Walter Nash and Soviet Foreign Minister Andrei Gromyko. On this trip Nash also met Soviet President Nikita Khrushchev, and proposed that the 1958 moratorium on nuclear testing – observed by the USSR, the US and the UK – be formalised into a permanent ban. However, the Soviet Union resumed nuclear tests in 1961 – as did the US, very shortly after.