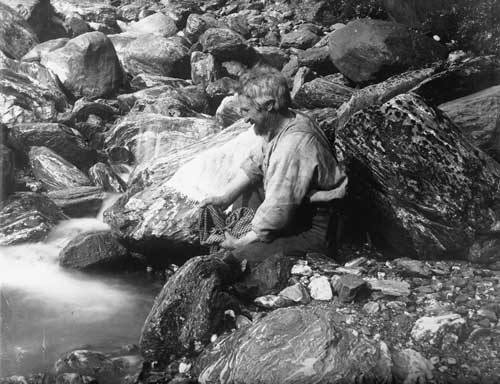 Between 1893 and 1895 Charlie Douglas explored with Arthur P. Harper, a Canterbury mountaineer and lawyer, particularly in the Franz Josef and Fox glacier areas. Harper took this photograph of Douglas washing his shirt in a glacial stream. At this time, Douglas began to muse on his life of exploration: ‘[H]ere I am after thirty years wandering, crouched under a few yards of Calico, with the rain pouring & the Wind & Thunder roaring among the mountains a homeless, friendless, Vagabond, with a past that looks dreary & a future still more so. Still I can’t regret having followed such a life and I know that even if I & thousands besides me perish miserably the impulse which impels them to search the Wild places of the Earth is good’ (quoted in Philip Temple, New Zealand explorers: great journeys of discovery. Christchurch: Whitcoulls, 1985, p. 148).