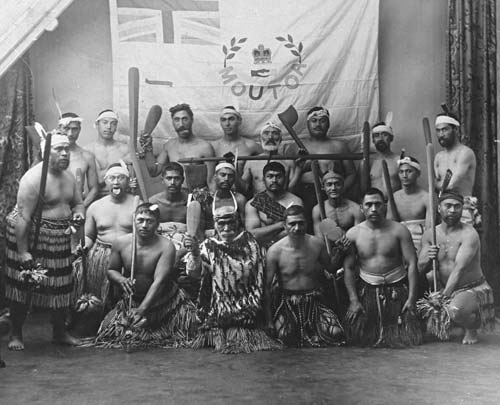 This photo of Whanganui Māori in front of the Moutoa flag was probably taken in the 1890s or early 1900s. After the battle of Moutoa in Whanganui local Pākehā women made a flag to thank Māori who had assisted in defending the town of Whanganui. The flag features a Union Jack in the corner, the word 'Moutoa' in the centre and, above that, a Māori and Pākehā shaking hands. It was presented to Mete Kīngi Te Rangi Paetahi and the lower Whanganui people on 26 December 1865 at the unveiling of the Moutoa memorial.

In 1869 Keepa Te Rangihiwinui held the flag when he met with the Duke of Edinburgh. The flag was flown at a number of important occasions, including the return of members of the Māori (Pioneer) Battalion to Pūtiki pā in Whanganui. It was held privately for a number of years before being gifted to a museum.

Te Arawa welcoming the Duke and Duchess of Cornwall and York, 1901