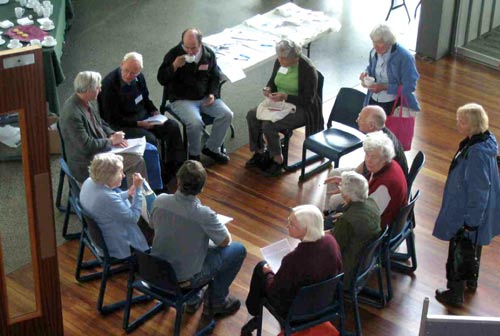 Breakout time at the 2009 national conference of the New Zealand Sea of Faith Network, an organisation with members from all religious faiths and those with no affiliation to an organised religion. The international Sea of Faith movement began in the 1980s in response to the work of British theologian Don Cupitt. The New Zealand network was formed in 1992. A prominent founding member was Lloyd Geering, a Presbyterian minister who was charged with 'doctrinal error' in 1967. The name 'Sea of Faith' comes from Matthew Arnold's poem, 'Dover Beach':

The sea of faith
Was once, too, at the full, and round earth's shore
Lay like the folds of a bright girdle furled.