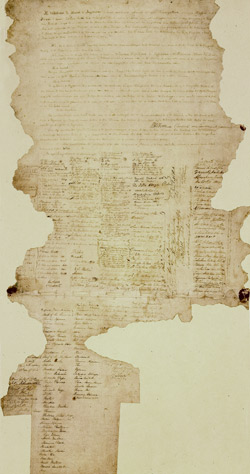 The treaty signed at Waitangi on 6 February 1840 was an agreement between the British Crown and Māori chiefs. It paved the way for British immigration to New Zealand and for a national government to be established. It also guaranteed Māori rights and privileges. New Zealand’s bicultural society is based on the treaty, which also gives the political system its legitimacy.

John Wilson, 'Nation and government - The origins of nationhood', Te Ara - the Encyclopedia of New Zealand, http://www.TeAra.govt.nz/en/document/2450/the-treaty-of-waitangi (accessed 27 May 2022)