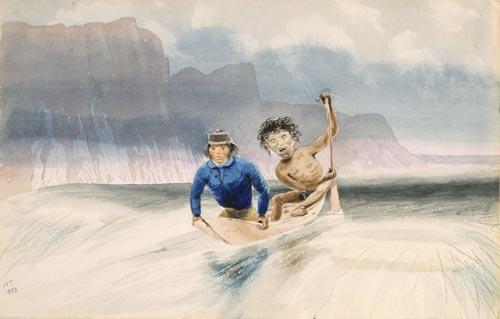 J. T. Thomson was appointed the Otago province’s chief surveyor in 1856, and the next year he began a survey of Southland. On the way south his party had to cross the Mataura River. Their ferryman was the chief Reko, who paddled them one by one across the ‘mighty torrent’ of the river in which ‘a single false stroke of the paddle was death’. Thomson’s watercolour of 11 January 1857 recalls the scene. Reko, wrote Thomson, ‘was old and asthmatic, and to his frailty we trusted our safety; but he rose to the occasion above his age and weaknesses. His breast was seen to rise with the pride of superiority, as he scanned us, the effeminate children of white mothers. He stood at the brink, an Ajax in action, a Ulysses in understanding’ (quoted in John Hall-Jones, Mr Surveyor Thomson. Wellington: Reed, 1971, p. 35).