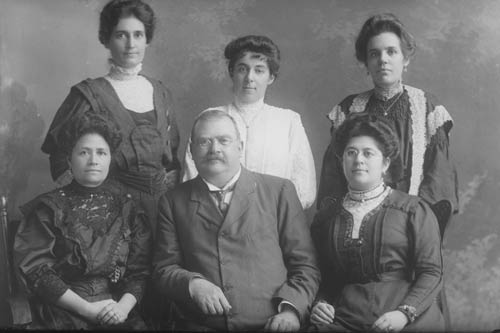 During the First World War some people of German descent who were living in New Zealand – even some who had been naturalised – were interned as ‘enemy aliens’. Businessman Gustav Kronfeld (seated, centre), though naturalised in 1893, came under suspicion because of his German birth and was imprisoned. He wrote to the minister of justice because being declared an enemy alien was a source of great worry to him. He was particularly concerned that his children who had been born in Samoa of his Samoan wife Louisa (seated, left) might be deprived of the privileges of British nationality.

Hello, i am related to

Hello, i am related to Louisa Kronfeld nee Silva who's my Great Grandads Aunty shown in this picture. You're most likely to get accurate info from the Samoan Library and yep Deidre Louisa's sister Catherine Silva married Montgomery Betham. Cheers Rebecca:)

this is def a photo of

this is def a photo of gustav kronfeld... i'm a kronfeld myself... and i've seen it a multitude of times...

Hi Helen. I am Gustav's

Hi Helen. I am Gustav's great-grand-daughter, and I am pretty sure that this is indeed Gustav, with his daughter Jenny Kronfeld on his left, and his wife Louisa (nee Silvera) on his right. I've printed it to check with my mother and I shall get back to you about it. I don't know who the three women in the back row are, but Mum (Tui Parr, nee Kronfeld) may know. I think one of Louisa's sisters did marry a Betham. I'll get back to you when I've spoken to Tui. You can contact me by email if you need to. Cheers, Deirdre Parr

Joy, thanks very much for

Joy, thanks very much for your comment. We'll follow this up with Auckland City Libraries, which is where we sourced this image.

The photo supposedly of

The photo supposedly of Gustav Kronfeld, is incorrect. The photo is of my grandmother Margaretta Reye nee Betham, her two sisters, her sister-in-law from Germany Edith Reye who visited Samoa in 1910 and her parents, Capt Montgomery Betham & Anna Betham nee de Silva. I have more facts and another photo taken at the same sitting without Edith Reye in back centre position. One of my grandmother's sisters married Sam Kronfeld. If you wish to know more please contact me via the email address below