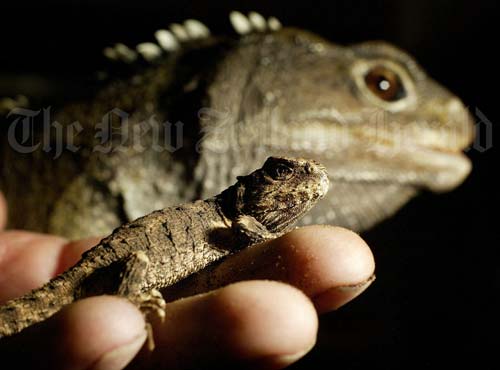 A rare, five-month-old Cuvier Island tuatara is held at Auckland Zoo. In the background is another tuatara, an 80-year-old adult from the Stanley Island group. Cuvier Island lies off the Coromandel Peninsula, and tuatara living on it are considered to be a subspecies. The tuatara (Sphenodon punctatus) is a living fossil as it has changed little in millions of years. It is thought to have been in New Zealand since it broke away from Gondwana, about 85 million years ago. Tuatara once lived on mainland New Zealand, but now only survive on offshore islands, most probably because they have been killed by rats on the mainland.