Whaling in the Bay of Plenty 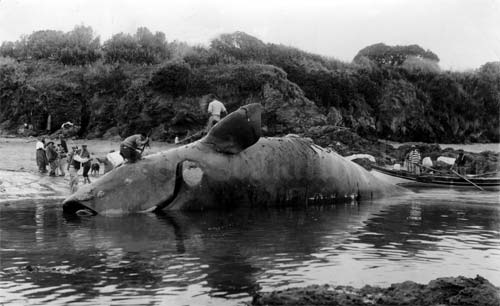 From the early visits by Europeans until the 1920s, whaling played a big part in the economy of Te Whānau-ā-Apanui. This story describes the experience of whaling in the early years of the 20th century. The image shows a whale being cut up on the beach near Cape Runaway.

During the season from September to December, lookout platforms were built at strategic coastal sites, such as near Te Kaha Hotel. They were usually manned from dawn till dark by two ‘spotters’. When they sighted a school of whales, a flag was raised on the boat station masthead. The menfolk of the surrounding farms would drop tools and take off to the boat station.

Boats were about 8 metres long, crewed by six oarsmen and a skipper who took hold of the 5-metre steering oar. Each boat usually carried two harpoons and three lances.

Towing a whale back to shore was hard work. Sometimes it took several crews 12 hours to get back with their catch. Whales were butchered at whale factories like the one in the cove below Te Kaha Hotel. The carcasses were floated as far up the beach as they would go at high tide, and then cut up at low tide.

The blubber was cut into strips and rendered in cast-iron tri-pots heated by firewood and blubber scraps. Gangs of blubber experts would work around the clock for days to get rid of a big whale. The oil was put in barrels and eventually shipped by schooner to Auckland, where it fetched about £16 a ton.

The meat was enjoyed by the community, and everybody would take portions home. But the nauseating smell from the rendering process penetrated everything for days afterwards.