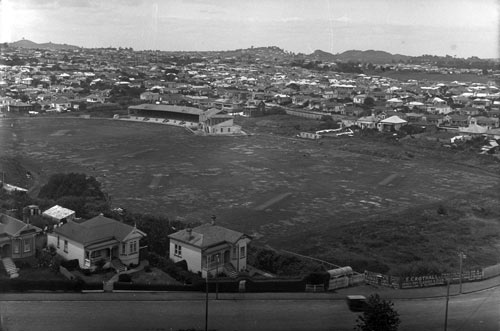 In 1912 the Auckland cricket association purchased Cabbage Tree Swamp, now called Eden Park, for its representative games, which had previously been played at the Auckland Domain. The following year the cricketers allowed the Auckland Rugby Union to lease the ground with full occupancy over the winter. A grandstand was put up and the first rugby fixture took place in 1914. The ground was drained, and the first test match, against the Springboks in 1921, attracted 30,000 spectators. By 1924, as this view suggests, the turf was still patchy, but the ground’s future as an international home for rugby was secure. The Rugby World Cup final was played there in 2011.