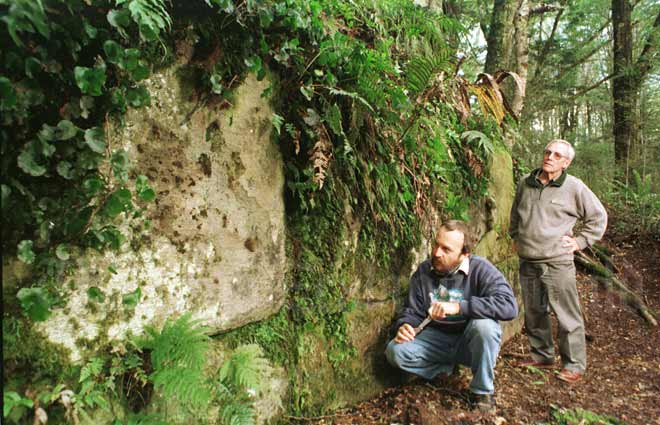 Some theorists who claim there were pre-Māori civilisations in New Zealand believed this stone wall in the Kaimanawa State Forest provided evidence for their ideas. It was said that the ‘blocks’ indicated that it could have been built by an earlier culture. However, the wall is a natural phenomenon. The blocks are fractures that appeared as the rock cooled, over 330,000 years ago.

‘The legend of the voyage to New Zealand’

If it was man made that would

If it was man made that would create a few implications regarding the the treaty of Waitangi.. who then would be the true tanga the whenua and what then would be the right for claim. I can't say wether it's man made or natural I can though say that the history of Earth and the movements of people's upon it is fraught with lies(I'm not going to type for hours about the subject, or on cognitive dissonance, or compartmentalization or flat out ignorance). There are more mysteries surrounding New Zealand's history than this wall and these 'mysteries' are common place world wide. I do find it interesting that that some Maoris who have kept their oral history regarding subjects such as the Waitaha freely admit they were not the first settlers. Go figure lol

All the information on the

All the information on the kaimanawa wall are evident that this structure is man made and the top experts like David Childress have examined and believe the wall could be a pyramid , and to solve the mystery does anyone know if its possible for a petition to be signed in favour to have the site excavated incase their is a forgotton civilisation that predates moari that could possibly rewrite new zealands history

These are NOT natural

These are NOT natural structures!! They were built well before we arrived.

Why and When did the

Why and When did the Government put a moratorium over information on this site??

I have visited the area many

I have visited the area many times while hunting, it certainly looks man made and the chances of finding any signs of human activity from 2000 years or even less for that matter would be nigh on impossible, it is covered in beech forest that was logged I think in the 1950s, the clements mill site is further down and on the opposite side of the road. If one walks through the forest they will find old piles of fence batons that were left behind around the same time, men would fell a tree and cut it to baton lengths then split the log using dynamite and wedges, all done on the spot, then they would cart them out, the piles left behind were probably done so because they could not fit them on the load and it would be uneconomical to go back and get them. Couple this with the actual logging operations which traces of are also visible in the form of old overgrown pulling tracks one gets the impression that the whole area has been turned over and anyone who has seen the effects of a logging operation will know what I'm talking about. An interesting fact is when the light in the media the Taupo Times had a write up about it and a spokesperson for the Tuwharetoa (the local Maori tribe) said they knew all about it and it was quote - on their secret map! How convenient, sounds like something I would expect to hear from George Bush

Went to see this wall

Went to see this wall yesterday, 14/5/2016. You will never convince me this isn't man made. These blocks of rock are dead square, with both horizontal and perpendicular joints. They are a perfect fit, just like the stones in many archaeological sites around the world, they are large and they are very flat edged. There is nothing NATURAL about them at all. If any of the doubters expect their explanations to be believed, there should be many of these so called "natural structures" allover this area. Furthermore, if they are indeed natural why has the Government got a moratorium over information on this site???

The wall is a natural

The wall is a natural occurrence but lets not take the scientific explanation. Lets take another direction. Who, out of all these theorists, has just grabbed a shovel and began to dig to find out what's behind it? No one! Why? For just 4 hours work they still won't do it lest they be proved wrong. If it is what you say it is...dig it out and prove it. If you are right I will pay you $5000 cash and feature your find on my website and Ancient Origins website.

Taupo lake is a caldera

Taupo lake is a caldera volcano. Theres no mention of it in this artical as a possible link to there being no artifacts left on site. It exploded 800 years ago didnt it?

Taupo lake is a caldera

Taupo lake is a caldera volcano. Theres no mention of it in this artical as a possible link to there being no artifacts left on site. It exploded 800 years ago didnt it?

I've checked out the website and don't see anything similar to the Kaimanawa Wall, which I am told has horizontal, as well as vertical, joints. I think there are many ancient sites where it is not easy to find the evidence of tools and techniques used in quarrying and dressing the stones. Also, the more ancient the site, the less likely it would be to find such traces. 2000 years is only one person's guess as far as I can see. Why not 1500 or 5000? Evidence is needed, but you have to be prepared to look. Galileo had a problem getting people to look through his telescope. I hope we've moved on from that time.

Actually there's lots of supporting info for Shaun's geological explanation... do a search on this text if you doubt it, and read the full report: "Extensive systems of open, continuous, vertical joints occur in many ignimbrites, typically forming a very widely spaced (3–5 m), irregular columnar pattern". Or search this: "Columnar jointing is thought to occur primarily in lavas and welded pyroclastic flow deposits". Or read this and check out the pics: https://en.wikipedia.org/wiki/Columnar_jointing It happens all over the world, naturally. I've seen it. Millions have. Alternatively, if it *was* done by hand 2,000 years ago (as suggested) then you would expect to find evidence of tool use, like chipping and dressing marks on the rocks. And test rocks, and rocks that split by accident. And a quarry nearby. And trackways to drag the rocks. You would also expect to find the tools used left in the area, some evidence of moving stones around, encampments for hundreds of people and everything associated with moving and lifting such large stone blocks... like human bones, animal bones, shelter, artefacts... none of which have been found. It is claimed that a rat was found, but reliably dating said rat is not so easy. And the rest of the evidence? All buried and so far lost, unlike the "wall"? Hmmm.

"...all over the place in the north island."? Where could I find another one of these natural formations? I doubt the Kaimanaua Wall would be in question if it was one of many. I agree with Karen, it is a silly official explaination. Especially, with the site now being excavated to resolve the issue once and for all.

Actually, to correct the two

Actually, to correct the two uneducated prior posters, this is in fact a natural ignimbrite formation with what are known as jointing patterns & factures that occur as the rock cools after being deposited by a pyroclastic flow. This isn't a dismissal or refusal to investigate further, this has been investigated thoroughly by geologists and absolutely is a natural phenomenon, there's no question about it. Furthermore, this is hardly unique, ignimbrite occurs like this all over the place in the North Island. So yep, nothing to be seen here, no conspiracy to cover up the truth. They're just jointed volcanic rocks, people.

What a silly "official"

What a silly "official" explanation. I don't understand the unwillingness to examine this site and see what the wall may be associated with, as it seems unlikely for any culture to have built a wall out in nowhere for nothing. BTW, I have a degree in anthropology and have been on Mayan digs in Honduras. I really loved the field, but did not pursue it as a career because of just this sort of closed thinking. In the rest of the world anything not readily explained is a "religious artifact". In New Zealand, anything unexplained is either a natural phenomena or somehow Maori. Sigh.

right so all of the

right so all of the fractures just so happen to vertically or hoisontally and never in any diagonal direction. I have been there to see it and another thing I have noticed is that the wall runs exactly east to west as I have seen in a few sources and confirmed when I was there. It also is just natural for volcanoes to form big rectangularish shapes.