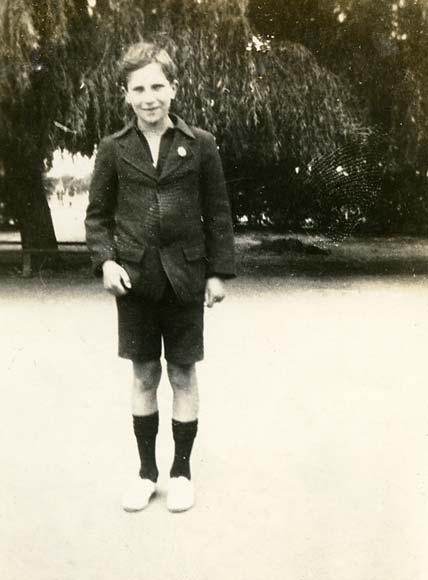 Ray Copland wears the school’s dux medal on prizegiving day at Napier’s Nelson Park School, December 1930. A few weeks later, on his first day at Napier Boys’ High School, he had to find his way home through fires and rubble.

This story is adapted from Scenes that are Brightest by Ray Copland of Christchurch.

When I came to, I was lying in the playground. Blood poured from above my right ear, my vision was distorted and my ear was deaf. I was completely alone. The long brick school building looked exactly the same, but now there were no boys, no masters, no sound. It was a ghost school. Then I felt a sharp pain in my right hand: my pen was dangling from its nib, which was buried in my palm. I pulled the pen and brought the nib out with it.

I turned and saw that the assembly hall, where lately hundreds of boys and a dozen masters had been singing, was now a hillock of bricks, completely destroyed. And there were the bike sheds, empty except for one bike. I realised that there must have been a colossal earthquake, and that everybody had fled homeward. I was never to discover how I ended up in the playground.

I knew I had to get home, but as I walked towards my bike a thunderous rumble enveloped me, and the ground rocked. I lost my balance and was once more down on the asphalt. The earth shuddered for many seconds and then all was silent again. I began to ride shakily when again I heard the rumble, and jumped off. Mile-wide rolls of grass waves raced from the east at incredible speed and rocketed away underneath me.

Out on the street, I was back in a living world, among other human beings. Suddenly a man tried to seize my bike, explaining dementedly, ‘I’ve got to get home to my wife and baby!’ But then he ran off, and shouted back, ‘You won’t get much further down Hastings Street, son. All the buildings are down.’

He was right. My direct way home was through the town, but I would have to go around it. I reached the ruins of the Technical College, and thought of my friend and neighbour, gentle Lloyd Rhodes. I didn’t know he was lying dead in there, on his first and only day at the college.

Emerson Street was buried in glass and rubble, every building broken. Ribs of timber and brick thrust up through the wreckage. Smoke was beginning to seep through the ruins, and I could see sharp tongues of flame, fed by a brisk wind from the sea. No way through.

I tried Tennyson Street but the further I went, the greater the mass of rubble. And I was scared that the fires might trap me. All this time the earth would suddenly shudder, threatening to throw me off my feet. My dead right ear seemed to unbalance me. Up ahead, the radiantly new Presbyterian Church was a jagged skeleton.

Then I remembered Milton Road. There it was, clear and almost empty. Leaning on the saddle I made my way at last up to Fitzroy Road. My father was out on the street waiting for me.