‘The invasion of Auckland by the Ngatipaoa’ 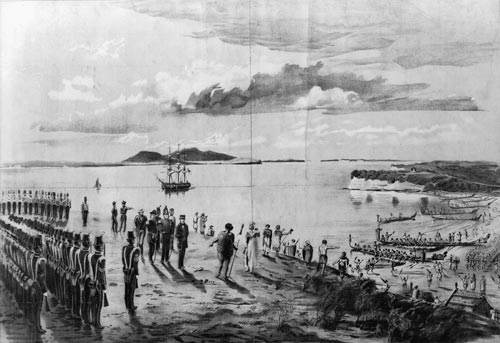 This painting by Kennett Watkins depicts an expedition to Auckland by Ngāti Pāoa in 1851. It occurred after members of Ngāti Pāoa visiting Auckland were involved in a scuffle with police, the result of a misunderstanding. Affronted, they returned to Hauraki, mustered a large fighting force, and set off for Auckland in a fleet of canoes. Governor George Grey had been warned of their arrival and was ready with troops and a frigate. Ngāti Pāoa and their allies were forced to back down. However, the so-called ‘invasion’ had a peaceful sequel: valuable heirlooms were presented to Grey, and much-needed food for Hauraki people was given in return.