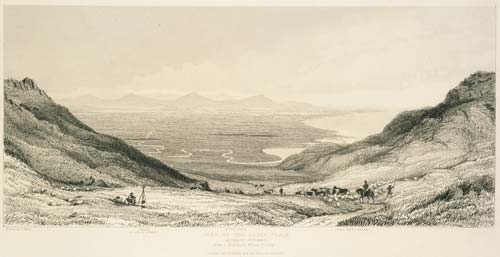 Lyttelton was the port for the settlement of Canterbury, but even before the first British immigrants arrived in late 1850 it was clear that many would make their homes on the large plains on the other side of the surrounding hills. A bridle path (over which horses were led) was surveyed and by early 1851 settlers were climbing up the path and over to the new town of Christchurch. This 1881 etching, based on William Fox’s drawing, is of the view they would have seen before descending to Heathcote.

Gold miners on a trail