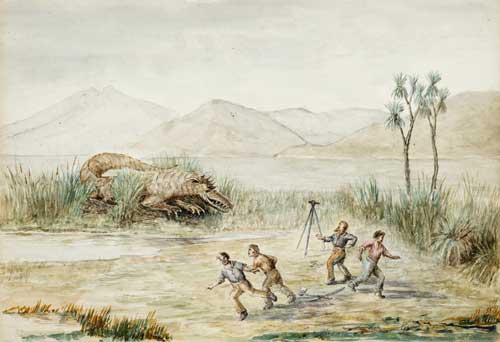 Kawautahi is a small lake 15 kilometres up Rētāruke River, a tributary of the Whanganui. It was avoided by Māori because a ferocious taniwha was said to live in it. In 1892 a surveyor employed three Māori from Taumarunui – Wārahi, Pita Te Aitua and Piki – to assist him in his work at the lake. Despite their concerns, they agreed because of the good wages on offer. However, while there they were allegedly attacked by the taniwha, and although slightly wounded, they all survived. They later told their story to T. W. Downes, who based this image loosely on their description.