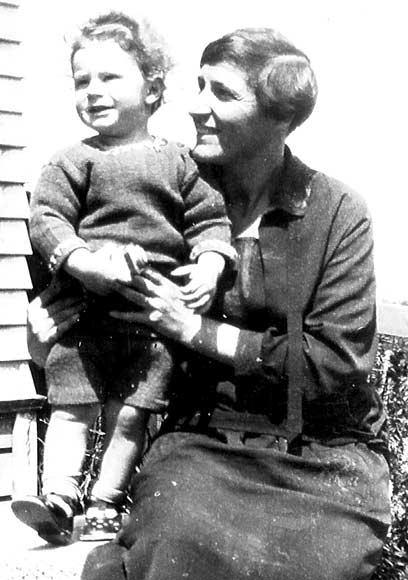 ... I was in the kitchen at the time, seeing to dinner, when a frightful noise and shake came. I knew Linda [a live-in helper] & Bevan were in the backyard so made a dash down the little passage to the side door – I was flung about from side to side and just as I got to the door down came a ton of bricks just in front of me. All the chimneys were built on the outside of the house. I thought Linda must be under the bricks. I started to climb over the bricks to get to Bevan & was just across as the remaining half came down. Linda appeared out of the dust & we three sat down on a bench with our arms locked around each other while the whole world seemed to rock, sway and crash. When things steadied down a little & the dust cleared off I could hear water rushing into the house from torn apart tanks, pipes and cisterns. There was dust and bricks everywhere & a big crack in the stucco part of the house above. I was afraid of the house catching fire so ran in to turn off the gas but a brick or something had struck the tap & turned it off for me. Still feeling dazed I could see soot and water everywhere, a table upside down in the middle of the floor – most of my dinner service which had been on the rack was covered with bricks & so were the saucepans on the stove. I rushed outside again to join Linda just as another huge shake came. As we got to the road we saw all our white faced trembling neighbours in groups there. We could hear a rush of children’s feet coming down the road from the school on Napier Terrace not five minutes away. They were almost all screaming at the tops of their voices. I’m not quite sure but I really believe Geoff led the way. Those long legs of his move when necessary.

That school was another of many miracles. Mr Hyslop [the headmaster], who is punctuality itself, had given them an extra ten minutes playtime & the whole 600-odd were out in the playground instead of in the brick buildings which were badly damaged. As long as I live I shall never forget the sight of the Nurses’ Home, the Technical School, & the Provincial Hotel.

Harold had left at seven in the morning on his return trip to Gisborne & my mind flew to him & I wondered if he & the car were buried somewhere on the road. Of course there were still lots of violent shakes & we could hear terrific crashes still coming from the city. We walked to the corner of the road where we could see the whole town beneath us & as we looked fire seemed to burst out at different spots. After a time white faced bruised husbands & various other menfolk began to struggle up the hill to see how their homes fared. Many of them seeing we were still alive hurried back to the city to pull out the dead and injured.

Of course I could only think how lucky we five were to be safe and together, but when I saw the ruin of my home and knew at once we could never afford to reconstruct it even if possible, I felt terrible. Almost all the windows were broken – every chimney down & when I at last dared to enter what a sight met my eyes. The chimneys being built outside had mostly fallen outside – all the mantelpieces were torn out, my big heavy piano was flat on its face, the clock torn off the wall was in the middle of the floor and broken. My sideboard had not moved & the china locked in the cupboards was all intact, including the stuff I had brought up from Christchurch. All the wallpapers were torn & the pictures hanging at the weirdest angles but undamaged. They and most things as were most valuable are now locked in our little garage.

As it was now the children’s dinner time I went into my wrecked pantry & tried to collect some food – running outside every now and then as a fresh shake came. I found a loaf of bread, a pound of butter sitting in the middle of a wreck of jam and milk, a cake thrown out of its tin & rather wet and sooty. I opened the china cupboard door & found most of the cups & plates etc quite all right so took my spoils outside. Returning at what I thought were safe intervals for knives, plates and what tea was left in the caddy. I may here tell you that not a man or boy would enter the house with me.

Later in the day I went upstairs for blankets and warmer clothes for myself & the children. My poor bedroom – it looked so nice that morning after a thorough cleaning. Where the pretty white fireplace had been was now a charming view of my next-door neighbour’s garden. I flung some blankets and pillows out of the window & some warmer things for the children & myself. Linda came up with me once and was able to get some clothes out of her room also - & I collected my purse – my gold watch that Mother gave me was on the floor – not a spot of glass left on it but I daresay it can be fixed.

… We slept out under the stars flat on the lawn the first night – the sky crimson with the glow of the burning city & frequent shakes – rumours (called official) kept coming through, such as to prepare for a tidal wave at six – that Napier would soon be submerged, etc. We and the Tiffens [nieghbours] threw in our lot together. Colville Tiffen made a fire in the gutter with bricks from my chimney – my kettles & I managed to get some water from my washhouse tank & tap. We scratched up some food from their house and mine. Mrs Tiffen, Mrs Miller (a sister of Mr Tiffen’s), Miss Blake, Mrs Tiffen’s sister, and Geoff slept in their car. I spread a carpet on the lawn, put some blankets, rugs and eiderdowns on it & Linda, Robin & I slept in a row. I made a nice little bed for Bevan with the aid of my two old Morris chairs. But in the night a sharp shake made me spring to my feet and snatch him up. Everyone else rose to their feet & rushed out of their garage homes.

We were in real danger from the fire coming up to us but it was wonderful how with blasting, etc, they kept it under [control]. Don’t believe the list of dead the papers give. We know of well over a hundred ourselves and believe in Napier and Hastings it may run into several hundreds. Heaps of shops fell flat & the fire tore through them so that only ashes of people known to be in them are left. Mrs Hindmarsh was getting her hair cut in the Florentine Salon – it fell flat & she was burnt with all inside. Dr Caro had wanted me to go down & have my teeth x-rayed on Tuesday but I had refused – fortunately for my skin. Thank God I had returned to Napier [from Christchurch] before it all happened & knew for myself what had happened to my boys.

Am afraid my face is more lined than ever –

Camping on the beach