The story of Pelorus Jack 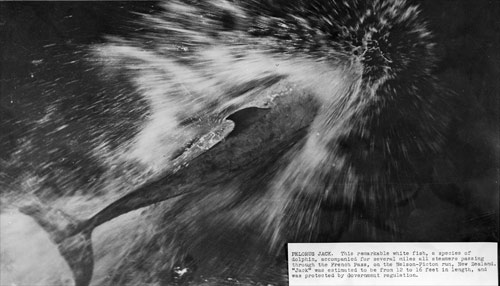 Pelorus Jack, a Risso’s dolphin (uncommon in New Zealand) that accompanied ships travelling between Wellington and Nelson, was so named because he would meet boats near the entrance to Pelorus Sound, in the Marlborough Sounds. First noticed in 1888 when he joined a steamer bound for Nelson, Pelorus Jack spent the next 24 years escorting boats from Pelorus Sound to treacherous French Pass, a narrow stretch of water between D’Urville Island and the mainland, where the water surges through at up to 8 knots.

Pelorus Jack always remained within a well-defined area. He joined boats heading for Nelson at the entrance to Pelorus Sound and swam to, but never through, French Pass. On the reverse journey, he met ships as they came out of the pass, staying with them for the 8 kilometres to Pelorus Sound before going his own way. He enjoyed swimming up against the boats and riding their bow waves.

Over the years his fame grew and he became a tourist attraction, drawing such well-known figures as American writer Mark Twain and English author Frank T. Bullen. But his celebrity attracted not only well wishers; in the early 1900s someone fired at him from a steamer. Demands that Pelorus Jack be protected by law led to a 1904 order in council (renewed twice before he died) under the Sea-fisheries Act 1894 and the subsequent Fisheries Act 1908. These protection orders were invalid, as neither act covered marine mammals other than seals.

Mystery surrounds Pelorus Jack’s death. Many believed that he was harpooned by Norwegian whalers who anchored off the entrance to Pelorus Sound in late April 1912. There is an account of an anonymous deathbed confession by a man who said he helped his father kill a dolphin stranded after a storm. They later realised it had been Pelorus Jack. Although there had been no alternative, the man was haunted by his action for the rest of this life.

Charlie Moeller, who maintained the marine light at French Pass, claims Pelorus Jack was washed up on a beach, where his carcass rotted. This latter account is likely; the dolphin was at least 24 years old, and probably died of old age.

The legend of Pelorus Jack lived on after his death. A chocolate bar was named after him and he is the subject of a number of songs.

Pelorus Jack, I wait for you

Pelorus Jack, I wait for you to show me through, with your love I watch from above to take through the dangerous seas, oh how I love thee.