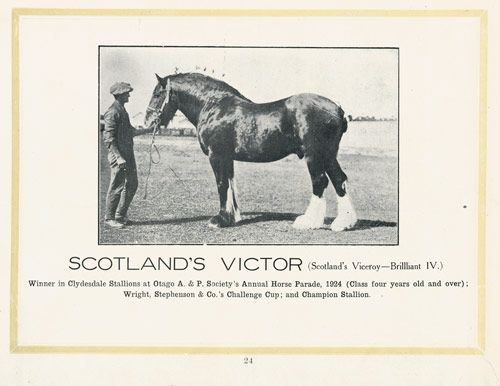 Scotland’s Victor was the winner of the Clydesdale stallions section, for horses four years and over, in the 1924 Otago Agricultural and Pastoral Society’s annual horse parade. The Clydesdale breed developed in the 1700s in the Clyde valley in Scotland. Clydesdales are extremely versatile, able to work equally well on hill country and hard surfaces in urban areas. They are very placid and will work tirelessly for long periods. The Clydesdale horse is classified as a rare breed. Numbers were in decline from the introduction of tractors in the 1910s until about the 1960s, but have remained relatively stable since then.