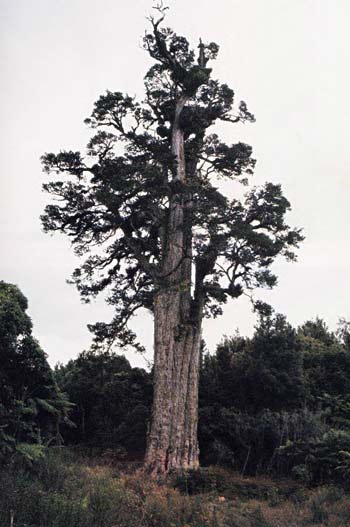 Between Mangakino and the Pureora Forest turnoff on State Highway 30, a 20-minute bush track takes you to one of the greatest living monuments in this country.

The trunk of Pouakani is glimpsed through the surrounding foliage as a silver-grey cliff or great rock outcrop until you stumble into the clearing around it. It is not just the size that makes this trunk impressive. The vast, tapering bole emerges from the great earth mound volcano-like. It is heavily textured with knotted, convoluted roots that plunge into the bowels of the earth. Around the base there are fissures and deep cavernous holes which suggest the original ground level is several metres below where you stand. One imagines a great hollow chamber within the lower part of the trunk. Looking upwards, one sees what could be a bough but in reality is a series of broken-off smaller trunks surrounded with branches, many of which carry vigorous new foliage. A few of these branches have grown vertical again to surpass the broken-off tops of former upper trunks.

The last major volcanic eruption showered the Pureora district with ash about 1,800 years ago, which is the age of Pouakani itself. Various lesser showers would have occurred later, but this part of the Volcanic Plateau seems to have had a more stable recent geological history than the Central Plateau, further south. Besides tōtara, other native species to reach a great size in the central North Island are rimu, mataī, miro, rewarewa and kawaka. These trees represent the pioneering species that have dominated forests since the beginning. Some great walks are to be enjoyed through ancient podocarp forests in the Pureora Forest Park, yet none of the trees approaches the size of Pouakani. And unlike its younger siblings, it is bereft of climbers and dense masses of mosses, ferns and epiphytes.

Pouakani is a healthy looking tree despite its great age. The new growth is firm and full of life. Much of the centre may have rotted away, but life goes on. Perhaps the violent storms that must have occurred during the past 1,500 years have accidentally prolonged the tree’s life. Becoming topped by a storm during its comparative youth, the trunk then grew sideways, increasing its stability at every knock-back. It got beyond the wind-fall stage of the other, more top-heavy trees abundant in the surrounding forest. So great became its stability that it preferred to break off rather than topple – like trimming a hedge. All the signs are that Pouakani has been enjoying a period of well-earned tranquillity in its old age.

Well worth the easy trek in

Well worth the easy trek in to stand beneath the great Pouakani. Majesty in the wild wet.....wear gumboots.