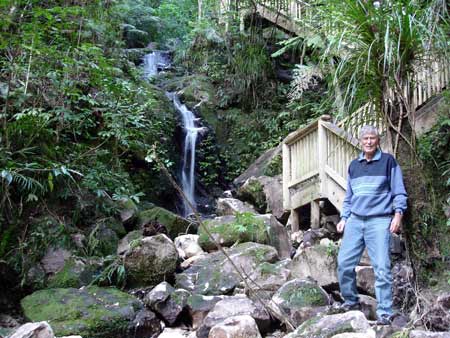 Phil Budd poses by a waterfall on Ross Track, on the slopes of Parahaki near Whāngārei. As a boy in the 1930s he discovered this route, and some rich history.

Contributed by Phil Budd of Whāngārei.

Whangārei is overlooked by the mountain, Parahaki. As a country boy who did not enjoy moving to town, I found my pleasure and escape on the flanks of Parahaki, amidst its kauri trees.

Today the Second World War memorial on the summit is reached by four routes including a road. In 1936 there were only two paths: the main path from the north, and one from the east above the lower Hatea River.

As an 11-year-old, the eastern path became my normal route for excursions into the bush. It was an easy track through scrubby mānuka, worn into a groove by the hobnailed boots of an earlier generation of industrious gum diggers. These men in turn were following a path worn by the bare feet of Māori, who would leave their fortifications on the summit of Parahaki and come down to the pīpī beds and fishing at Whangārei Harbour.

One day I took a different route. At Sunday School we had learned of David Livingstone searching for the headwaters of the Nile. Going past our house was a small stream that had its source somewhere near the top of Parahaki. Where?

Taking on the persona of the great missionary explorer I stepped into the stream, followed it up, scrambling over a few small rapids and discovered an old mine shaft. Someone earlier in the century had followed a thin brown seam shot with a trace of gold, hoping it would turn into something richer. It didn’t.

Beyond the mine was thick bush. Here the stream became a cascade tumbling down a series of waterfalls. As I worked my way up I noticed the soft sandstone had worn patches, suggesting other feet had been up there. My hunch proved right, as further up a distinct if overgrown path moved off to the left up a ridge. Later exploration led me to the Māori fortifications at the top of Parahaki. The stream had been the path of ancient warriors coming down for water on the Hatea River.

Following the stream up, I came to a level area where large kauri and rimu trees gave me a real sense of being enveloped in (Livingstone) jungle. Calm pools had large kōkopu (fish) in them. Later I came up and fished for them, and felled a cabbage tree to enjoy its succulent heart.

Continuing my exploration I fought through a tangle of supplejack and eventually came to a small soak at the base of a bluff. It was the stream’s source. I had done the Livingstone thing and found the source of the stream. I had also found a new and nearer route to the top of Parahaki.

In 1945, on discharge from the New Zealand air force, I discovered that ‘my track’ had been turned into a proper path with stairs up the waterfall. It was named ‘Ross Track’.

Phil, you are the genuine

Phil, you are the genuine Kiwi I like to feel much like. Your recolection of the exploring of Parahaka has turned over exactly the answer I was looking for. So many times I have shown people the wonders of the Ross track, and now I can add to my epilogue. Thanks kindly , Bonny

cool story must of been very

cool story must of been very scary