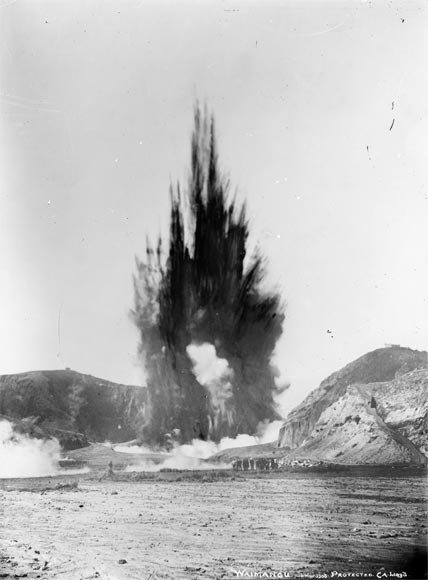 The Waimangu (‘black water’) geyser was the largest geyser recorded anywhere in the world, erupting between 1900 and 1904. The dark plume contains mud and blocks of rock. This photograph was taken in 1903.

Scientist Humphrey Haines witnessed the eruptions in January 1901, and his wife wrote the following account:

‘There was a small burst, followed by a gigantic explosion, far exceeding in magnitude anything previously witnessed. A vast column of black water was projected upwards, rising in an apparently solid body … Then for a moment it seemed to pause, but in another instant its apex burst outwards and a torrent of inky water streaked downwards to meet and lose itself in the snowy billows which rolled majestically upwards.’

The geyser’s life was brief and spectacular. Eruptions of muddy water and large rocks to heights of 150 metres were common, and there were occasional super-eruptions to the remarkable height of 460 metres. In comparison, the tallest currently-active geyser in the world (Steamboat geyser, in Yellowstone National Park in Wyoming) erupts to maximum heights of 100 metres. The top of Auckland’s Sky Tower is about 330 metres above street level.

Not surprisingly, a tourist industry sprang up around Waimangu geyser. Accommodation for tourists, overlooking the geyser basin, was built in the summer of 1902–3. Throughout 1903, the geyser increased in activity, and increasing numbers of visitors flocked to see the spectacle. However, a tragic event occurred that year: four tourists ventured closer to get a better view, but were swept away and killed by a sudden eruption. The geyser began to wane in 1904, and by November of that year activity stopped as suddenly and inexplicably as it had started.

Prince of Wales Feathers and Pōhutu