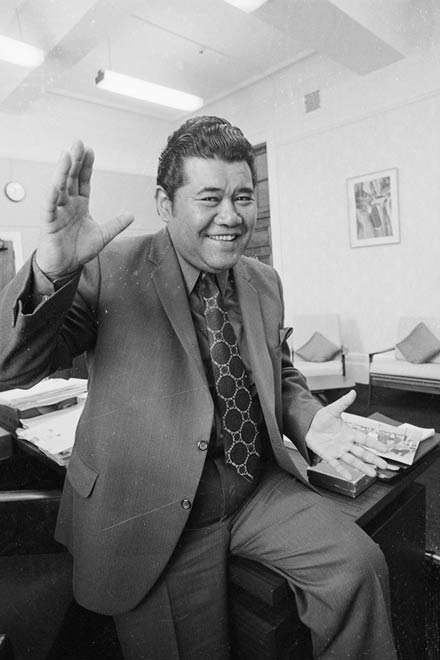 As minister of Māori affairs in 1975, Matiu Rata was the politician most responsible for the establishment in that year of the Waitangi Tribunal. In 1986 Rata (of Ngāti Kurī in the far North) was also a principal claimant in the tribunal's landmark Muriwhenua hearings. The specially composed song 'Karanga rā' was first sung when those hearings opened at Te Hāpua. The English translation of its words is:

‘The clarion voice of Rata [Matiu Rata] calls The movement in the tail of the fish [the far North] responds.
In our midst we now have Tai [Eddie Taihakurei Durie, tribunal chair]. Now is the time to give strength to the treaty.
Here too is the group, all members of the tribunal, Tainui [Koro Wetere, minister of Māori affairs], Rāwiri [David Lange, prime minister] and Pāora [Bishop Paul Reeves, the governor-general]. Between you, this fish can swim.
Māori people rise and be vigilant; Tauiwi [Pākehā and others], the time is now to face each other.
People come and go, But the land endures.’