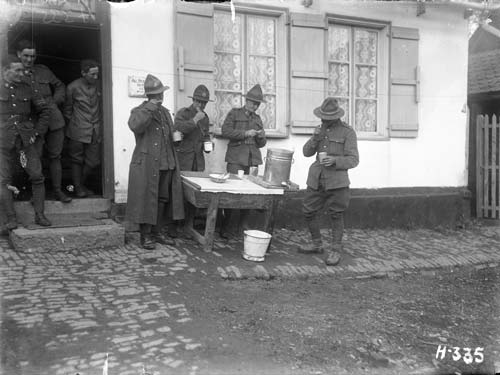 New Zealand soldiers brush their teeth at what was called 'the prophylactic bench' before visiting a Defence Force dental surgery, in France in November 1917. The New Zealand Dental Association had lobbied the Defence Force to set up dental-health care for the troops, and the New Zealand Dental Corps was established in November 1915. Dental officers inspected the teeth of prospective soldiers in mobilisation camps, and  accompanied troops when they were mobilised overseas. A dental hospital was set up only 5 kilometres from the front line on the Somme in September 1916. Dentists treated outbreaks of 'trench mouth' (a painful gum infection) as well as doing fillings and extractions, sometimes under fire.