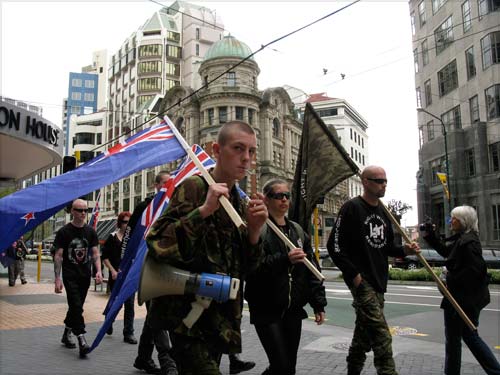 Members of the National Front march down Lambton Quay in Wellington on what they call flag day, 25 October 2009. The numbers of press and police come close to matching the number of marchers on these flag days. This group based on the British National Front formed in the late 1970s. In 2010 it described itself as a political party, although it was difficult to deduce what its policies were, other than homophobia, racism and patriotic nationalism.

I noticed the site address

I noticed the site address ends with ".govt". Correct me if I'm wrong, but logically this would mean "Te Ara" is affiliated with the New Zealand Government. If this is the case, then I'm not sure how it is considered ethical to include in this article such blatantly biased statements as "although it was difficult to deduce what its policies were, other than homophobia, racism and patriotic nationalism". Regardless of the policies of the party, it is completely innapropriate for the government to use such a politically charged terms as "homophobia", as that is establishing an official opinion on homosexuality, which would be contrary to the democratic principles of New Zealand.