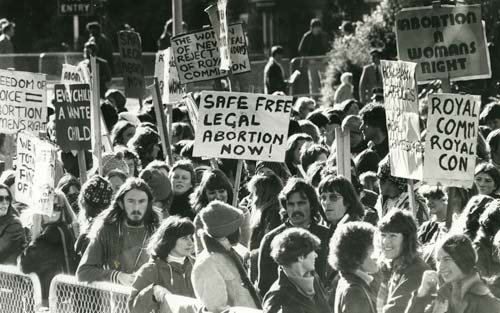 This May 1977 abortion-rights march (which numbered about 300) – seen here in Parliament grounds – was probably prompted by the Commission of Inquiry into Contraception, Sterilisation and Abortion, set up by the government to deal with the perennially controversial topic of abortion. Many of the marchers were young members of the Women’s National Abortion Action Campaign, accompanied by a sprinkling of male supporters. Although abortion was largely seen as a women’s issue, it also concerned many men. Some wanted their wives or girlfriends to have access to it, while others were fiercely opposed.