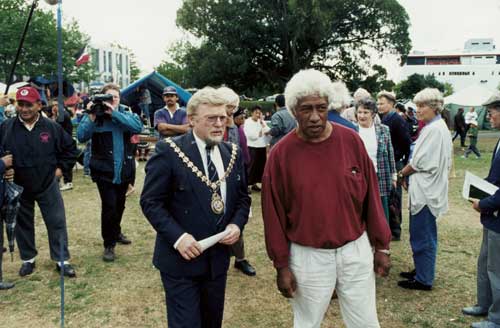 In the 19th century Whanganui Māori began legal processes to protect their rights in the river. The fight continued in the 20th century. In 1995 concern widened to issues of land and especially to Pākaitore (Moutoa Gardens). Māori claimed that this was the site of a pā and a traditional place for trade, and that it had been set aside from the purchase of Whanganui. The city denied these claims. So on 28 February 1995, Whanganui Māori occupied the site. Here Niko Tangaroa, one of the leaders, talks to the mayor of Whanganui, Chas Poynter.