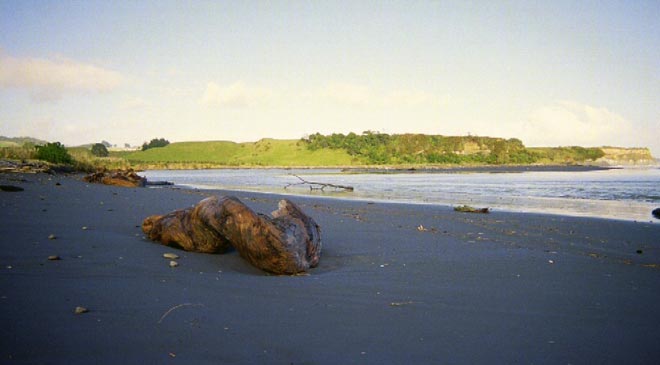 At this beach near the Mimi River mouth on the north Taranaki coast, in 1975, Dave Ellis learned a little about the history of the area.

Contributed by Dave Ellis of Wellington.

I grew up in Inglewood, among cow paddocks on the northern slope of Mt Taranaki. My family often visited the coast on fine weekends, ranging from Oākura in the south to Urenui in the north. One day we went past Urenui to the mouth of the Mimi River. There were no baches or houses, only a couple of fishing huts. The beach there is black ironsand, with light grey papa cliffs and smooth volcanic stones.

We never had a plan when going to the beach, and on this Sunday in 1975 we wandered aimlessly about as usual, exploring the bits of stone and driftwood, and patterns of wind and water in the sand. My parents sat on a log and admired the view while my brother, my sister and I wandered around separately, each in our own world.

I didn’t find anything interesting washed up, but there was a line of low sand hills near the river mouth and I wandered over to see if there was anything in the bank underneath them. I noticed a white circular dome in the exposed bank on the north side, about 10 metres away. I climbed up the steep bank and dislodged the object with my hands. A human skull fell down the slope and rolled across the damp sand, leaving a shallow track, and finally rested on its side.

My father was used to imaginative interpretations of things I found. (I once found an entire beach of gigantic fossilised sea creatures.) When he saw the skull he didn’t argue with my identification, but wasn’t so sure about my explanation: I imagined it to be the skull of some murdered farmer, killed in a domestic battle and disposed of in the river.

A section from the back of the skull was missing, and we decided it was probably the result of a blow to the back of the head. Dad walked up to the nearest farmhouse, returning with the news that bones turned up all the time as the area had been the site of a Māori battle. The farmer said to rebury the skull anywhere we liked.

We buried it in a deep hole in the bank where we found it. My sister made a cross out of driftwood and placed it on the spot, and decorated the area with shells and toetoe fronds.

Later that afternoon when we followed the track back to the car I saw various human bones, mostly thigh bones, lying about next to a shed. This image is still very clear to me, but I’m not sure how accurate it is.

One kid at school said it would have been cool to take the skull home and keep it in my room. As if.