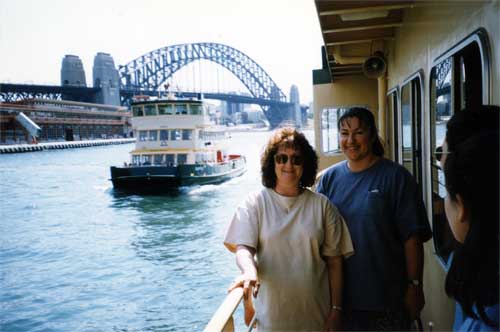 After finding a message in a bottle at Ahipara in 1973, Mary Ujdur (right) met up with Kerry, and they have remained friends ever since.

Contributed by Mary Ujdur of Auckland.

My boyfriend and I went for a drive from Kaitāia to Ahipara, at the end of Ninety Mile Beach, one afternoon in November 1973. We decided to park the car and go for a walk along the sands, it being a lovely day.

I liked to browse the flotsam brought in by the tide, just in case, as I knew bottles with messages had previously been found along that beach. And there it was: a wine bottle with a cork in its neck. As I picked it up I could see there was a piece of paper inside it. Unable to wait until I got home, I broke the bottle open and extracted the note.

It was from a young woman who was on a cruise ship out of Sydney. She had been celebrating her 16th birthday with friends who encouraged her to write a message and throw it overboard in a bottle. Her name was Kerry and she had included her address in Sydney. As I was the same age I thought it might be fun to write a reply.

Kerry was amazed to receive a reply to her message, especially from New Zealand. We have been writing to each other ever since and have met on several occasions, the first being when she and her husband came to New Zealand in 1976 and she was a bridesmaid at my wedding. In 1996 I travelled to Australia for a holiday, and during my time there Kerry and I were guests on a morning television chat show, celebrating more than 20 years of friendship.

I found more than just a message in a bottle, I found a lifelong friend.