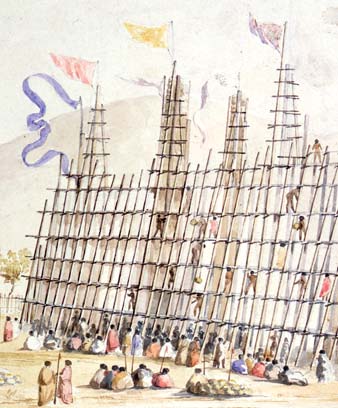 Māori food production was based around kāinga (villages) and followed a yearly calendar. The products of horticulture, fishing, eeling, fowling and food gathering were exchanged between tribes.

Polynesians carried pigs, chickens, dogs and rats around the Pacific in their canoes – but only kurī (dogs) and kiore (Pacific rats) survived in New Zealand. At first, there was plenty of meat from seals, dolphins and moa (huge flightless birds). Māori hunted these until moa became extinct and seal colonies vanished. People also ate kurī, kiore and smaller birds.

Māori brought kūmara (sweet potato), taro, hue (gourd), uwhi (yam) and tī pore (Pacific cabbage tree) with them from Polynesia. These were difficult to grow in New Zealand’s cooler climate. Kūmara was planted on sunny slopes. Sand and gravel were added to the soil to improve drainage and warmth.

Māori also dug up and ate aruhe, the root of the bracken fern. They gathered berries, greens, roots and nectar from plants in the forest.

Fishing was important – mainly for barracouta in the south and snapper in the north. People also took shellfish, karengo seaweed, kōura (crayfish) and kina (sea urchins). They caught eels by building eel weirs – fences across a river that channelled the eels into pots.

Work took place depending on the season. The new year began in winter, when the stars of Matariki (the Pleiades) rose before dawn. Activities were also timed to fit with the nights of the moon.

Food was exchanged between tribes or sub-tribes to increase their mana (status). When people gave a gift, they would receive a larger gift in return. Coastal people exchanged food with inland people – they gave food from the sea such as fish, shellfish and seaweed, and received forest foods such as potted birds and kiore (rats), and hīnau cakes.

Some work was done by individuals – such as catching birds or kiore. A person or a whānau (family) were sometimes given the right to use a tree or kiore habitat.

Other jobs were huge. Fishing trips could involve 1,000 people, and a net a kilometre long. If a big feast was planned, a huge garden area might be cleared. Some pā had thousands of people.

Print the full story
Next: Page 1. Initial settlement Next